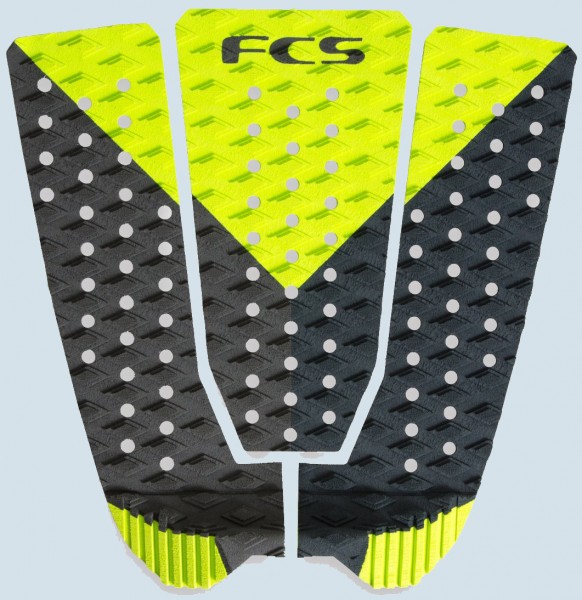 Kolohe Andino's signature 3 piece pad. It’s safe to say Kolohe Andino’s new FCS Traction pad is truly unique. And while it shares some of the same features as other FCS ‘Athlete Series’ pads, there’s some custom elements that set it apart from any other pad on the market:

The Kick:
Probably the most specialised feature on the pad. At times, Kolohe actually stands on top of the kick when he’s turning, so we applied a severe chamfer to the edge of the kick to better fit the contour of his foot. We also incorporated channels on the chamfer to assist with toe and heal grip, and played with the steepness and height of the kick ramp according to Brother’s specifications.

The Groove:
After trying a number of our grooves, Kolohe liked the feel of the Double Diamond Groove, but it needed to be clustered closer together to provide the optimum spacing. For his pad we moved from 11mm spacing to 8mm spacing between the grooves to hit the required feel underfoot.

Designed and tested in collaboration with the world’s best surfers, the FCS Athlete Series Traction range has rider specific features for the ultimate in performance.